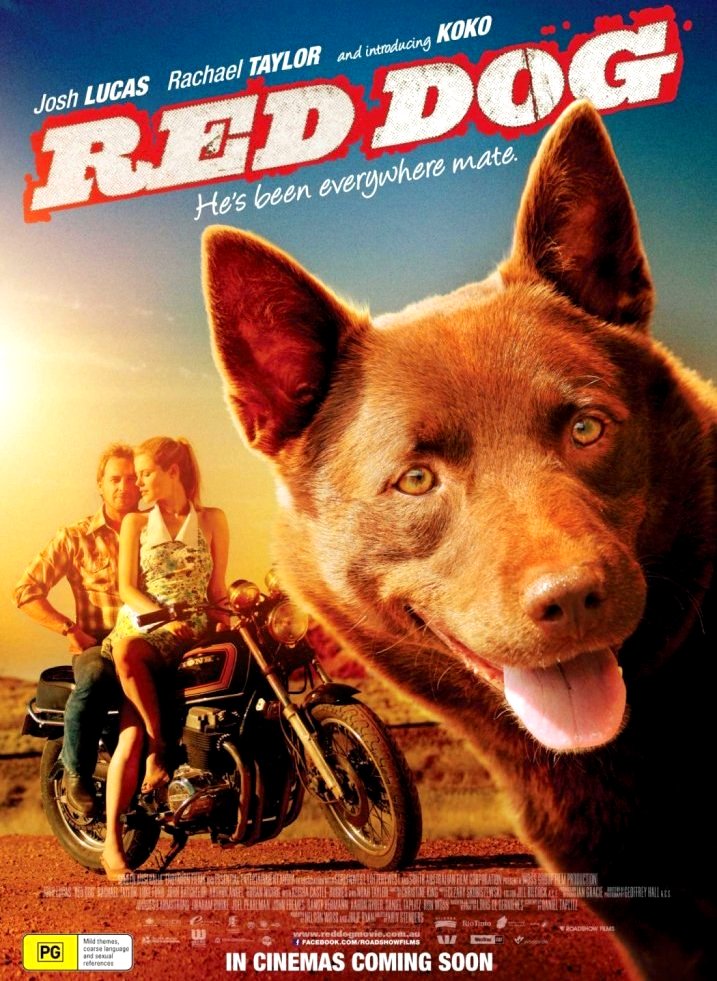 Red Dog the Australian movie was released in 2011. The film was directed by Kriv Stenders and produced by Nelson Woss and Julie Ryan. Red Dog is based on a true story from the novel Red Dog by Louis de Bernières (2002), which charts the life of a popular “Red Cloud Kelpie“ nicknamed Red Dog, in Karratha, Western Australia. Red Dog was nominated in 9 categories, winning 7, including Best Feature Film at the 2011 Inside Film Awards.

Red Dog was an Australian Kelpie / cattle dog cross who was well known for his travels through Western Australia‘s Pilbara region. Red Dog was believed to have been born in the town of Paraburdoo in 1971. Red Dog had a variety of names to those who knew him, including Bluey, Tally Ho and Dog of the Northwest. Red Dog died on the 21st November 1979. There is a statue in the memory of Red Dog in Dampier, which is one of the towns to which he often returned.

Another book about Red Dog was published in 1993 by Beverly Duckett ~ Red Dog: The Pilbara Wanderer.

Red Dog’s memorial statue caught the attention of British author Louis de Bernières while passing through Dampier, when he was inspired to write a book loosely based on Red’s legend called Red Dog.

Visit RedDogWA.com the official merchandise website for Red Dog in Pilbara WA. The Red Dog website was developed in response to the many requests from locals and tourists from all over Australia and the world, looking for more information and souvenirs of Red Dog and for a piece of Pilbara history.

YouTube video: Red Dog (2011) Trailer & Interviews: Renee has a chat with Hollywood heart throb Josh Lucas about starring in a film set in the Aussie outback with Rachel Taylor, and also chats to Koko…the star dog!…

YouTube video: Red Dog ~ ‘The Search’ by Cezary Skubiszewski: This song was featured in the Red Dog movie…

iN MEMORY OF MY DOG SABLE: