You’ve seen the movie, now you can buy the property!

Cliff Young, Australia’s iconic gumboot jogger’s former potato farm is for sale, and a chance for someone to own a little piece of Australian history. The potato farm which now produces raspberries and strawberries was formerly owned by the late Sydney to Melbourne Ultra-Marathon runner Cliff Young, was put up for sale for $395,000 in May 2013.

Cliff Young owned the 16 acre farm while he was training for the historic marathon race of 875 kilometres (544 miles) which he won at the age of 61 in 1983. The farm located at Kawarren near the town of Gellibrand, is 17 kilometres south of Colac in the Otway Ranges, Victoria. The 6.7 hectare farm is on the state forest eastern boundary known as The Beechy Rail Trail, and close to Yahoo Creek and Love Creek (200 to 400 metres away). Cliff Young lived on the property with his brother Sid before he married Mary Howell in 1984, when he was 62 and she was 23 years old. Cliff Young sold the farm for $84,000 in 2001, two years before his death in Queensland.

The farm has been run as certified organic for the past 12 years, with over 100 fruit trees, plus raspberries and strawberries on the property. It was listed by LJ Hooker Colac agent Wayne Mackrell, and has also been listed on Gumtree by the owner Paul Simmons.

The ABC screened CLiFFY the telemovie on Sunday 26th May 2013. The movie was about Cliff Young’s journey from potato farmer to the winning of the Sydney-Melbourne Ultra-Marathon at the age of 61. Kevin Harrington the actor played the part of Cliffy.

Cliff Young (OAM) was born Albert Ernest Clifford Young on the 8th February 1922. Cliff was the eldest son to Mary and Albert Ernest Young, and had a younger brother named Sid. Cliff grew up on a farm in Beech Forest in the south west of Victoria. The Young family farm was approximately 2000 acres in size with about 2,000 sheep, which Cliff would round up on foot, reckoning it was the easiest method.

In 1982, after training for months around the Otway Ranges, 60 year old Cliff attempted to break Siegfried “Ziggy” Bauer‘s world record for 1,000 miles (1,600 km) in 11 days and 23 hours. His attempt to break the world record was in Colac’s Memorial Square, which he abandoned after 500 miles.

In 1983 Cliff Young won the inaugural Westfield Sydney to Melbourne Ultramarathon at the age of 61, completing the distance of 875 kilometres (544 miles). The race at the time was run between Australia’s two largest shopping centres, Westfield Parramatta in Sydney, and Westfield Doncaster in Melbourne. He ran at a slow shuffling pace as he trailed the leaders for on the first day, but while the other runners slept on the first night, he took the lead and maintained it for the remainder of the race, winning by 10 hours.
Before running the race, Cliff had previously run for 2 to 3 days straight rounding up sheep in gumboots. During the race he imagined that he was running after sheep and trying to outrun a storm. The Westfield marathon run took him 5 days, 15 hours and 4 minutes, almost 2 days faster than the previous record for any run between Sydney and Melbourne. All 6 competitors who finished the race broke the previous record, but were unable to match Cliff’s lack of rest. He was unable to repeat this performance or claim victory again, when attempting the event in later years.

YouTube video: Footage of Cliff Young and other runners in the 1983 Westfield..

Cliff Young became very popular in 1983 after his tortoise and hare feat, and in Colac the Cliff Young Australian 6 Day Race was established that year. Cliff also got married to Mary Howell that year after winning the Westfield Marathon.

In 1997 at the age of 76 he made an attempt to beat Ron Grant’s 16,000 kilometre run around Australia record, but only completed 6,520 kilometres of the run due to his only crew member becoming ill. In 2000 Cliff achieved a world age record the 6 day race in Victoria.

The “Young Shuffle” was adopted by some ultra-marathon runners because it expends less energy, with at least 3 winners of the Sydney to Melbourne race using Cliff Young’s unique technique to win the race.

Cliff Young was a vegetarian from 1973 until his death in 2003. He lived in the family home with his mother and brother Sid, and remained single throughout his life, until he married 23 year old Mary Howell at the age of 62.

Cliff and Mary divorced 5 years later. He ran more than 20,000 kilometres during his competitive career. After 5 years of illness, Cliff died of cancer at the age of 81 on the 2nd November 2003 at his home in Queensland.

Australian Ultra Running Legend, Cliff Young passed away at the age of 81 at 5.20pm on the 2nd November 2003, after a long illness. Instead of flowers for the funeral service, it was asked that people send a cheque or money order to Waterbird Rescue (c/o The Powers Twins) in Queensland, Australia, where Cliff worked on a voluntary basis. It is now known as Twinnies Pelican And Sea Bird Rescue inc.. There was a Service held for Cliff at Caloundra at 10:30am on Wednesday 5th November 2003… read more

Cliff Young became a vegetarian in 1973 due to his love of animals and no desire to kill them, and eat them. Cliff had been working for Waterbird Rescue (now known as Twinnies Pelican And Sea Bird Rescue inc.) for many years on a voluntary basis with, Paula and Bridgette Powers, when he retired to Queensland.

Please donate here ~ at Twinnies Pelican and Seabird Rescue inc. official website ~ Any donation of $2 or more is tax deductible.

Instead of flowers for Cliff’s funeral service, it was asked that people donate the money to Waterbird Rescue, which was a great way to remember Cliff, and continue his help saving the waterbirds, via his favourite charity, at the official website:  TwinniesPelicanAndSeaBirdRescue.com & on Facebook.com/pages/Twinnies-Pelican-and-Seabird-Rescue 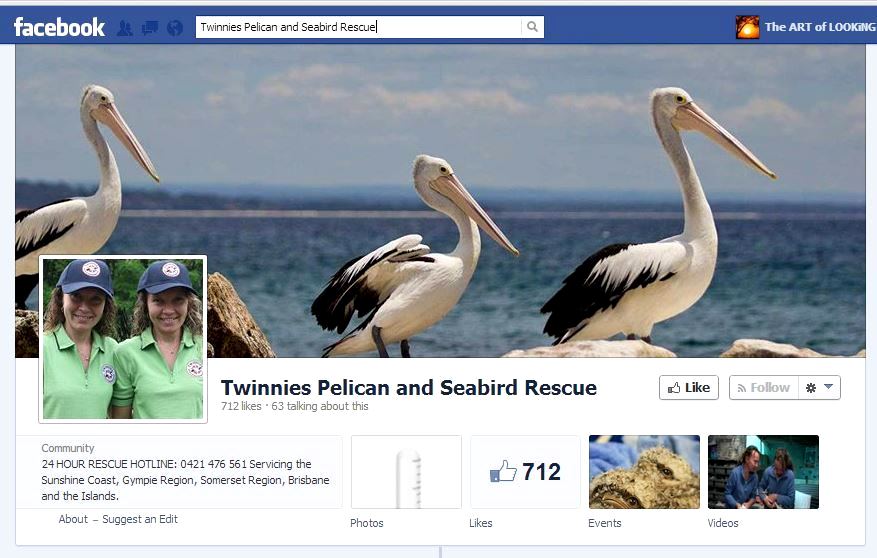 The book: Cliffy: The Cliff Young Story by Julietta Jameson

The ABC telemovie starring Kevin Harrington celebrated the 30th anniversary of Cliffy’s great feat. Cliff Young’s victory in the 1983 Westfield Sydney to Melbourne Ultra-marathon was second only to the America’s Cup as the biggest sports story of the 1980s. Cliffy, with his laconic country style and shuffling gait, captured the hearts of the Australian public like few before or since.

But there was more to Cliff Young than the simple farmer who became an overnight sensation. Julietta Jameson has talked to those who knew and loved Cliffy to paint a rich, detailed portrait of the unknown side of the man. Who was he beforehand? What happened afterwards? Not just the gripping account of an amazing, iconic race ~ Cliffy is the book that tells the whole story.

Cliff Young in the news 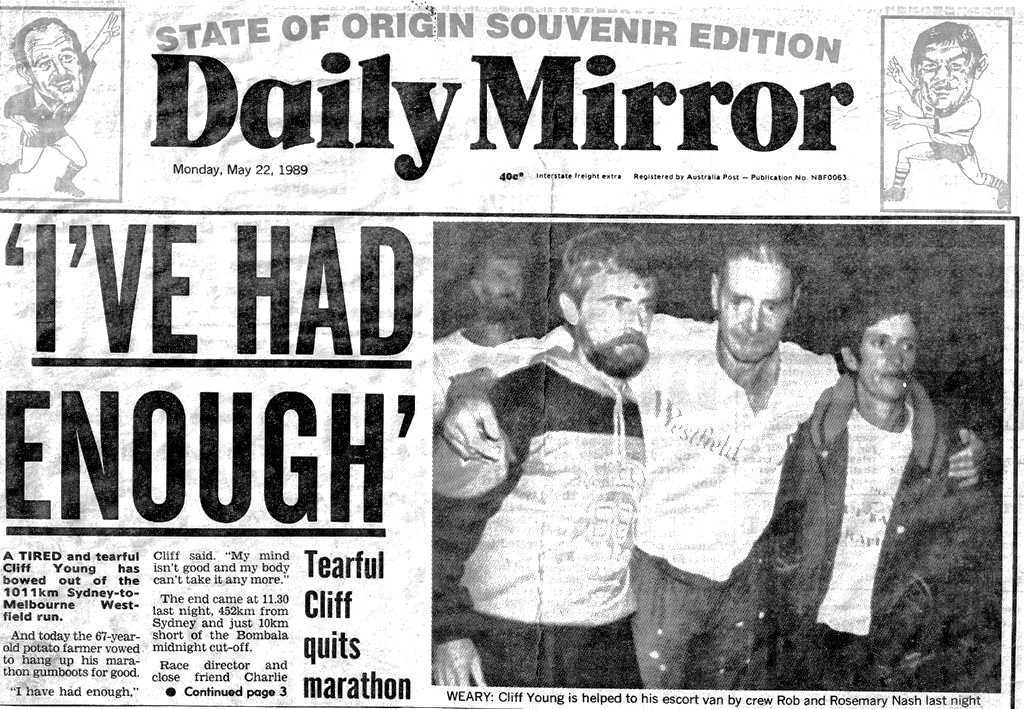 I’ve Had Enough (Monday 22nd May 1989) ~ Daily Mirror  ~ A tired and tearful Cliff Young has bowed out of the 1011km Sydney-to-Melbourne Westfield run. And today the 67-year-old potato farmer vowed to hang up his marathon gumboots for good. “I have had enough,” Cliff said. “My mind isn’t good and my body can’t take it anymore.” The end came at 11.30 last night, 452km from Sydney and just 10km short of the Bombala midnight cut-off.

One shuffle at a time (2 May 2013) ~ The Age ~ ”What do you put in your hair?” an enamoured woman in the Brisbane crowd called out. ”Just water love,” answered Cliff. Julietta Jameson’s Cliffy is full of anecdotes that make you smile, but none capture the book’s subject better than this one… read more

FOREVER YOUNG: The Cliff Young story (22 March 2013) ~ The Herald ~ In Australia in 1983, fame was still relatively democratic. That year, one of the most popular TV shows in the country starred a craggy former painter turned comedian. In the same 12 months a locally made movie called BMX Bandits made a star of a gangly young girl with frizzy ginger curls, freckles and crooked teeth. The Paul Hogan and Nicole Kidman of that time are hardly recognisable as the celebrities they are in the 21st century. But at that moment, there was far less of a cookie-cutter predictability to Australian fame… read more

Cliff Young’s remarkable story brought to life in telemovie Cliffy (25 May 2013) ~ The Australian ~ ‘IT is full of surprises, and adventures, and incongruities, and contradictions, and incredibilities; but they are all true, they all happened.” So wrote Mark Twain of Australian history. He would have loved Cliff Young, our most unlikely sports hero, a runner who trained in gumboots and possessed a sly farmer’s wit… read more

Interview with Cliff Young : This interview, by Tania Jamieson, was published in the “New Vegetarian and Natural Health” magazine (Winter 1997, p40) ~ CoolRunning.com.au

A 61 Year Old Potato Farmer Once Won One of the World’s Most Grueling Athletic Competitions ~ TodayiFoundOut.com

The Legend of Cliff Young: The 61 Year Old Farmer Who Won the World’s Toughest Race ~ EliteFeet.com

Cliff Young – the farmer who outran the field ~ WesternFarmPress.com

Many questions asked have landed on this page via Google and other search engines, asking the following questions:

…many of these questions cannot be answered here yet, but if you know, please let us know

This page was last updated on Thursday 4th October 2018