“Gangnam Style” has been recognized by Guinness World Records as the most “liked” video in YouTube history. The Gangnam Style music video by Psy which has only been available to view since the 15th July 2012, has been ‘liked’ in excess of 2,141,758 times, making it the most liked video in YouTube history. The closest competitors for most liked video on YouTube include LMFAO’s ‘Party Rock Anthem’ (1,574,963 likes), Justin’s Bieber’s ‘Baby’ (1,327,147 likes) and Adele’s ‘Rolling in the Deep’ (1,245,641 likes). PSY ~ GANGNAM STYLE (강남스타일) M/V ~ Official YouTube Video uploaded for the first time ever on YouTube on the 15th July 2012 by OfficialPsy

Korean Pop Superstar ‘PSY’ has already achieved quite a lot with his video for ‘Gangnam style’, and now he can add a Guinness World Record to that list.

‘Gangnam Style’, which has only been available to view since the 15th of July, has been ‘liked’ in excess of 2,141,758 times, making it the most liked video in YouTube history.

PSY (real name: Park Jae-Sang) is a South Korean singer, songwriter, and rapper. ‘Gangnam Style’, his most successful single to date, is the most viewed K-Pop video on YouTube.

This also marks the first time a South Korean artist has topped the iTunes charts.

Dan Barrett, Guinness World Records Community Manager, comments, ‘Having been the “Have you seen this?!” video of the last two months across the web, it’s great to be able to award a record for this tremendously popular video. In years past it was unthinkable that something would be viewed a hundred million times, and now “Gangnam Style” has achieved more than twice this figure in just 3 months on YouTube.’

Gangnam Style has also become the biggest selling single in one week in Australia’s history, with Psy officially receiving the record for the most singles sold by any artist in one week.

Psy rocked Australia in Gangnam Style on Wednesday 17th October 2012, when he performed live to a packed crowd, on one of Australia‘s most popular morning television shows, Sunrise, with his global smash hit Gangnam Style. Psy entertained a big crowd of amazed onlookers, and even taught the famous Invisble Horse Dance to Sunrise‘s Mel, Beretts, Matt, Nat and Grant. See Psy on the Sunrise videos 🙂

The GANGNAM STYLE music video by PSY became the World’s most watched video on YouTube on the 24th November 2012, after surpassing Baby by Justin Bieber.

The Gangnam Style YouTube Video became the 1st in the world to have 1 billion views. YouTube added a special commemorative dancing Psy animated gif to the counter.

Gentleman was the follow up single released by Psy on the 12th April. The first public performance of the song, with an associated dance, was unveiled at Seoul World Cup Stadium in Seoul on the 13th April 2013. The main lyric line of the song is often mistaken for “I’m a mother f**ker gentleman”, but is actually “I’m a mother father gentleman”.

POSTS ABOUT PSY ON ANTONK.com: 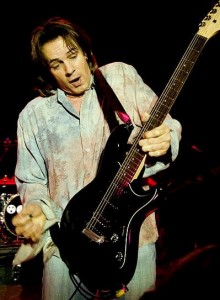 Rick Springfield the Australian rock star from the 1980s, and actor from America’s longest-running American soap opera General Hospital, dropped into a Boronia restaurant, in my hometown, in the Outer Eastern suburb of Melbourne, for a bite to eat, then got up and spontaneously sang three songs on Sunday the 15th of July, 2012. It was the second time that Rick Springfield had visited Cove Steakhouse Wine, Bar & Grill in Alchester Village, Boronia. He previously visited the restaurant on Australia Day in January 2012.

Rick sang a cover of “Gloria”, The Beatles’ “Twist & Shout” and closed with his hit song “Jessie’s Girl”. Rick is a family friend of a local musician, who is a member of Breaking Distance, a band which regularly plays at the Steakhouse restaurant. Read the local news story by Knox Leader: ’80s music icon Rick Springfield rocks Boronia restaurant

Rick Springfield stops by to chat with TODAY’s Kathie Lee & Hoda about his new documentary, “An Affair of the Heart,” and explains how he now has a new appreciation for his fans today, after not treating them so well when he first became famous.

Visit NBCNews.com for breaking news, world news, and news about the economy

Rick Springfield was born Richard Lewis Springthorpe in South Wentworthville, a western suburb of Sydney, on the 23rd day of August in 1949. Rick is the son of an Australian Army career officer, and had to move to London to live in 1960, for his father’s work. The family moved back to Australia in 1962, and settled in the Melbourne suburb of Ormond.

In 1969 Rick Springfield joined the band Zoot with Daryl Cotton, Rick Brewer and Beeb Birtles. Zoot had a no. 4 hit in Australia with the acid-rock version of The Beatles “Eleanor Rigby” hit song. In 1972 Rick started his solo career with his début single “Speak to the Sky” reaching the top 10 in Australia. In 1972, he moved to the United States, and had a No. 1 hit with “Jessie’s Girl“ in 1981 in Australia and the US., which he received the Grammy Award for Best Male Rock Vocal Performance. Rick then had four more top 10 US hits, “I’ve Done Everything for You”, “Don’t Talk to Strangers”, “Affair of the Heart” and “Love Somebody”. He also became an actor in 1981, portraying Dr. Noah Drake on the daytime drama General Hospital, until 1983 and also in 2005 to 2008.

In 2010 Rick Springfield published his autobiography, Late, Late at Night : a Memoir. More recently Rick played a degenerated version of himself in ‘Californication’.

“Don’t Talk To Strangers” by Rick Springfield in 1982

“Eleanor Rigby” by Zoot, with Rick Springfield & the late Darryl Cotton in 1970

Grammy award-winning musician, actor, and New York Times bestselling author Rick Springfield will publish his debut novel with Touchstone. Titled Magnificent Vibration and scheduled for publication in May 2014, the novel portrays a hero who has hit a dead end in his life, but who serendipitously receives a 1-800 phone connection to God via an inscription in a mysterious self-help book that may just give him a shot at saving the planet.Magnificent Vibration is a potent tour de force that is by turns hilarious, poignant, spiritual, over-the-top, and deeply meaningful.

“The only good grades I ever got in school before I was kicked out were for creative writing. I thought that fiction might be in my future but then my career took a different path once the Beatles showed me what a blast being in a band could be. Writing my memoir Late, Late at Night reminded me how much I love the craft. So I decided to give fiction a shot again.Magnificent Vibration is the result. I’m still not quite sure where it came from, but once I got going, it practically wrote itself. I’ve heard writers I admire speak of that phenomenon, so maybe I’m on the right track.” ~ Rick Springfield