Melbourne experienced an earthquake with a magnitude of  2.8,  the biggest earthquake to shake Melbourne’s suburbs since the 19th of June 2012. The quake shook the outer eastern suburbs of Melbourne near Ferntree Gully and Boronia, with the epicentre in END_OF_DOCUMENT_TOKEN_TO_BE_REPLACED

LUCKY DRiVER ESCAPED DEATH WHEN A GiANT BiG BOULDER ROCK ALMOST CRUSHED CAR iN TAiWAN captured on dashcam video ~ Saturday 31st August 2013  A Taiwanese motorist and their passenger travelling along a road in Keelung City, Taiwan had a very narrow escape from a disastrous death, after their car was almost crushed by a giant boulder the size of a bus. The huge rock rolled down from the top of  the mountain (see video below) onto the road just as the driver was END_OF_DOCUMENT_TOKEN_TO_BE_REPLACED

Arnold Schwarzenegger arrived in Australia at Sydney on a Qantas flight this morning. Big Arnie is back after 13 years since he last visited Australia. The Hollywood icon is in the country as a END_OF_DOCUMENT_TOKEN_TO_BE_REPLACED

Nudism on the nudist beaches, and in the nudist clubs in Australia appears to be a declining trend, especially with Generation Y. Although baring all in the nudism scene might be on the decline, baring all via technology is on the rise, especially since the invention of camera phones, and webcam chat, which is dominated by Generation Y with their sharing of naked selfies and other virtual antics nude online.

On Friday the 22nd February 2013, The Project on Channel Ten did a special news report about baring all becoming a declining trend in Australia, titled Hello Cheeky. The Project went searching for the naked truth about nudists, in a discreet way. If you want to catch a glimpse of a lot more nudity than they’re allowed to show on a prime time TV show, you’ll have to visit a legal nudist beach in Australia, for the experience. Read the full news story: The Project TV: The Naked Truth About Nudists & see The Project TV: Getting Naked news story video

Scientist confirmed the find of RiCHARD III Of ENGLAND, found under a car park in the city of Leicester on the 4th February 2013, after 500 years. See Reuters news: England’s King Richard III found after 500 years

Researchers confirm that a skeleton found under a city centre car park in
Leicester is that of King Richard III, on TelegraphTV video:

A painting bought at a flea market in the US for $7, turned out to be a rare artwork by French Impressionist painter Pierre-Auguste Renoir, valued at up to $100,000. The rare painting was bought by a woman at a Virginia flea market, as part of a box lot that also included a plastic cow and doll. Later she took the painting to a Virginia auction house, where experts confirmed it was Renoir’s Paysage Bords de Seine (Landscape on the Banks of the Seine), a river scene from about 1879, and believed to be originally bought from a Paris gallery in 1926. The oil painting was done on a linen napkin, allegedly for Renoir’s mistress. END_OF_DOCUMENT_TOKEN_TO_BE_REPLACED 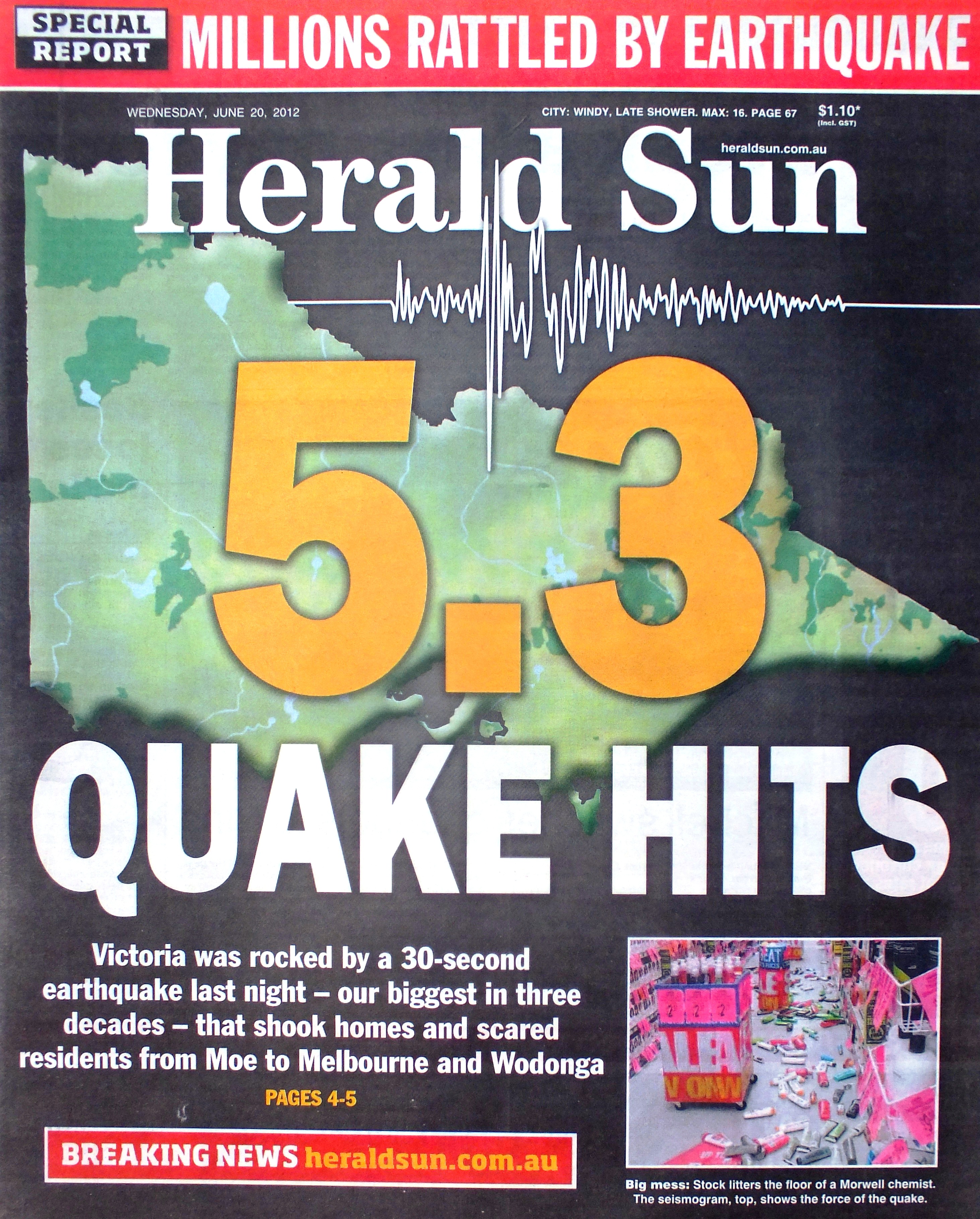 The biggest earthquake to shake Victoria in 109 years was felt by millions of people at 8:55 pm on Tuesday the 19th of June 2012. The quake shook most of the state of Victoria, and parts of New South Wales in Australia, with a magnitude of 5.4 for about 30 to 40 seconds. It was approximately 10km deep with the epicentre between Moe and Trafalgar   in the southeast.

The Geoscience Australia website went into meltdown as many people searched for information about the earthquake, while Facebook and Twitter was flooded with quake talk. Visit Geoscience Australia for the official earthquake details regarding seismograms, data, shaking and damage area, technical and scientific information and summary. See some of the first news coverage from 2 hours after the Victorian quake…

There were more than 60 aftershocks in the area near Moe within 24 hours since the earthquake began. Most of the aftershocks were small and unnoticeable, except for one that registered a magnitude of 3.5 on the Richter Scale. The aftershocks will continue in the area, with the possibility of a quake equaling or exceeding the original one on Tuesday night over the next few weeks, according to experts. Geoscience Australia is setting up aftershock monitoring equipment in the area to pinpoint the location of the initial quake, which was almost as strong as the magnitude 5.6 quake that killed 13 people in the Newcastle earthquake in 1989.

See the the Channel 7 Sunrise footage from the following morning after the Victoria earthquake, including Dr Karl Kruszelnicki explaining earthquakes…

24 year old Nathan Laurens aka Nate from the South Eastern suburbs of Melbourne, was upstairs attempting to video record himself playing guitar and singing, when the house started shaking during the Victorian earthquake on Tuesday 19th June 2012. See the video Nathan uploaded on YouTube…

Since Nathan Laurens uploaded his video of the coincidental earthquake during his song recording, it has gone viral on Youtube, with 89,120 views and 270 comments, within 48 hours of the Victorian quake. Visit Nathan’s YouTube account: Nate Laurens, to see Nathan performing without being interrupted by a quake. Nathan was interviewed on Sunrise on Channel 7 by David Koch aka Kochie on the 21st June 2012. See Nathan Laurens on Sunrise ‘Earthquake Idol’…

Could Victoria have a BiG EARTHQUAKE like the 2011 Christchurch Earthqauke? Experts say yes, but Victoria would be spared the most devastating tremors. Victoria will not experience a magnitude 9 earthquake as Japan had in 2011, because Australia sits atop a stable magnetic plate.

The FUNNY SiDE Of The QUAKE: Victorians were able to have a laugh after the state had a big shake, as seen on Twitter and Facebook on Tuesday night (19 June 2012)…

The laughs continued when my friend Dom B posted a call out to help the Bogan capital of Victoria, Moe, with the following post on Facebook…

MOE EARTHQUAKE DiSASTER APPEAL… dig deep people!.. An earthquake measuring 5.2 on the Richter scale hit Moe at 9pm Tuesday evening, with its epicentre in Haigh Street. The earthquake decimated the area causing approximately $30.00 worth of damage. Victims were seen wandering around aimlessly, muttering “Faaackinell”. Three areas of historic burnt out cars were disturbed. Many locals were woken well before their centre link cheques arrived. The Moe local paper has reported that hundreds of residents were confused and bewildered and were still trying to come to terms with the fact that something interesting had happened in Moe. One resident – Tracy Sharon Smith, a 15-year-old mother of 5 said “It was such a shock, my little Chardonnay-Mercedes came running into lounge room crying. My youngest two, Kevin and Jason slept through it all.” Apparently looting, muggings and car crime were unaffected and carried on as normal. The Australian Red Cross has so far managed to ship 4,000 crates of Bacardi-Breezers to the area to help the stricken locals. Rescue workers are still searching through the rubble and have found large quantities of personal belongings, including Health Care Cards, also Jewellery and Bone China from Big W.
HOW CAN YOU HELP?.. This appeal is to raise money for food and clothing parcels for those unfortunate enough to be caught up in this disaster. Clothing is most sought after – items most needed include: Moccasins, Hoodies, baseball caps, flannel shirts, tracksuits, singlets (blue & white) white sport socks, Reebok boots, and any other items usually sold at Dimmy’s or The $2 Shop. Food parcels may be harder to come by, but are needed all the same. Required foodstuffs urgently needed include: Microwave meals, Baked beans, Ice cream, Chips, Soft Drinks. Donations of $15.00 will be taken to buy a packet of Winny Blue 25s and a lighter to calm the nerves of those affected….you gotta laugh!

Chris Lilley best known for his television creations, We Can Be Heroes: Finding The Australian of the Year, Summer Heights High, and Angry Boys, posted a photo of the quake damage at his house on his Twitter…

Victoria was been shaken by a 4.3 magnitude earthquake at 7.11pm on Friday the 20th of July 2012, one month after a 5.4 magnitude quake rattled Gippsland. Geoscience Australia said the Moe earthquake would’ve been felt up to 50km from the epicentre. The previous aftershocks in the last two weeks were of 2.2 and 2.7 magnitude.

Read more about ‘Another Earthquake Shakes Victoria’ at the Herald Sun