SAMANTHA JADE from Perth won the 4th season of the X FACTOR in Australia on the 20th November 2012. Samantha was the first female to win the Australian series of X Factor. The 25 year old pint-sized singer’s recording dream finally came true when she beat Jason Owen and The Collective in the final. She had been dropped by several record labels before deciding to give it one last shot on The X Factor. Samantha Jade won a Sony Music recording contract and a management deal. Her 1st single “What You’ve Done To Me” was successfully released, only taking minutes to reach No.1, and knock judge Guy Sebastian off the top iTunes spot. See the Australian News story: “X Factor winner Samantha Jade’s single What You’ve Done To Me iTunes number one” 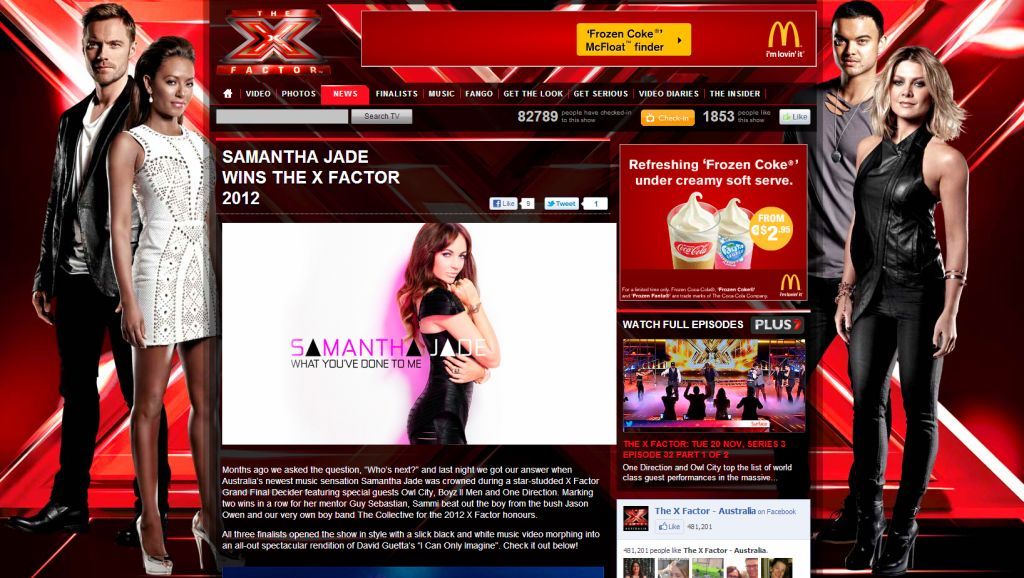 Samantha Jade was born Samantha Jade Gibbs in Perth, Western Australia on the 18th April 1987. She has worked as a singer-songwriter, model, actress, and dancer. Samantha has written tracks for artists including JoJo and Ashley Tisdale. She began modelling at 4 years old, and won a talent show singing Amazing Grace when she was 9 years old. Samantha attended Hampton Senior High School. In 2002 her 1st studio recordings were made with Platinum mixer / producer Conley Abrams in Los Angeles, but the Perth label they were recorded for folded that same year. In 2003 her family moved to Los Angeles for Samantha to pursue her singing career, where she co-wrote Secret Love for JoJo on the Shark Tale film soundtrack in 2004. Also in 2004 Jade signed a multiple album recording contract with US record label Jive Records.

“Turn Around” by Samantha Jade

Turn Around by Samantha Jade is #44 on The Top 50 Singles Of 2007. At the time Samantha Jade was signed to Jive Records, a major American label in 2007 when she had some success with her single Turn Around, while she was specializing in R&B infused pop. Turn Around also made its way on to the Australian music charts to #83.

Firestarter by Samantha Jade was released on the 28th June 2013, as the lead single from her upcoming 3rd studio album. Firestarter was written by Jade and David Musumeci and Anthony Egizii of DNA Songs, the producers of the song. Firestarter debuted and peaked at No.9 on the ARIA Singles Chart and was certified platinum for selling 70,000 copies.

SAMANTHA JADE is the name of the new self-titled debut studio album by Samantha Jade, released on the 7th December 2012, through Sony Music Australia. The lead single from the album “What You’ve Done to Me” preceded the album’s release.

Samantha Jade, the self titled debut studio album for 2012 (Sony Music Australia) featuring the lead single “What You’ve Done to Me”

Samantha Jade’s next new album is due out later in 2013, followed by a headlining tour across Australia.

YouTube video: Samantha Jade performing “What You’ve Done To Me” on X Factor Indonesia, to a TV audience of 22 million people…

How tall is Samantha Jade?..

Dami Im the 25 year old South-Korean born Australian piano teacher and singer from Brisbane in Queensland won the 5th series grand final of Australian X Factor with her mentorDannii Minogue on Monday the 28th October 2013. It was an underdog story, considering Dami the shy and awkward girl at the audition originally didn’t make it into the final 12, but returned with a wild card when the original top 12 finalist Matt Gresham withdrew from the competition. Dami beat Taylor Henderson and Jai Waetford, both mentored by Ronan Keating, in the grand final, to win a recording contract with Sony Music Australia.