Nik Wallenda became the 1st person in the World to high-wire walk across the Grand Canyon on the 23rd June 2013 (USA). Nik Wallenda crossed the Little Colorado River gorge in Navajo territory outside the Grand Canyon National Park‘s borders. END_OF_DOCUMENT_TOKEN_TO_BE_REPLACED

Samuel Johnson’s sister Connie is dying of Breast Cancer, so he set out on an epic challenge RiDiNG AROUND AUSTRALiA ON A UNiCYCLE!.. It’s all about keeping the promise he END_OF_DOCUMENT_TOKEN_TO_BE_REPLACED

The Gangnam Style music video by Psy on YouTube became the 1st in the world to have 1 billion views, on the 21st December 2012.

Gentleman was the follow up single released by Psy on the 12th April. The first public performance of the song, with an associated dance, was unveiled at Seoul World Cup Stadium in Seoul on the 13th April 2013. The main lyric line of the song is often mistaken for “I’m a mother f**ker gentleman”, but is actually “I’m a mother father gentleman”.

POSTS ABOUT PSY ON ANTONK.com:

I’m inspired by people like Felix Baumgartner who dare to dream, and fly with a faith in themselves, with a DO rather than die thinking about it attitude ~ Anton K

.
Felix Baumgartner was a special guest on the Graham Norton Show (BBC One) on Friday 2nd November 2012, sitting on the sofa with singing star Robbie Williams who performed his new single, Candy; plus comedian Paul O’Grady and ballet star Darcey Bussell. See the video…

5 YEAR OLD FELiX DREW HiMSELF PARACHUTiNG
Felix Baumgartner drew a picture of himself parachuting down to earth while his family watched, and gave it to his mother, when he was 5 years old in 1974. Felix’s mother handed it back to him 12 years later, when he did his first skydive on the 23rd of August 1986.

MiSSiON TO THE EDGE OF SPACE For New WORLD RECORDS

Red Bull Stratos and Austrian skydiver Felix Baumgartner are on a mission to break a World record, with a 39km (128,097 ft) skydive over Roswell, New Mexico, USA.

The Red Bull Stratos: Mission To The Edge Of Space will see Felix Baumgartner ascend 39km (128,097 ft) over Roswell, New Mexico in a helium balloon, then free falling to Earth from the balloon for 5 to 6 minutes, until the parachute is pulled, and contact is made with the ground after 10 minutes. If all is successful, Felix Baumgartner will break the sound barrier, and become the first human to do so without vehicular power. A successful jump will also result in Felix breaking 3 more world records; the highest manned balloon flight, the highest altitude jump, and the longest time in free fall. The latter 2 records are held by retired United States Air Force Colonel Joe Kittinger.

Red Bull Stratos and the mission to the edge of space, is attempting to transcend human limits that have existed for 50 years. Felix Baumgartner is supported by a team of experts, and plans to ascend to 120,000 feet in a stratospheric balloon, then make a freefall jump to earth at supersonic speeds, before parachuting to the ground. This mission attempt holds the potential to provide valuable medical and scientific research data for future pioneers. The Red Bull Stratos team brings consists of the leading minds in aerospace medicine, balloon fabrication, capsule creation, engineering and pressure suit development. It also includes retired United States Air Force Colonel Joseph Kittinger, who holds 3 of the records Felix Baumgartner will attempt to break. Joe Kittinger‘s record jump from 102,800 ft in 1960 was done when no one knew if a human could survive a jump from the edge of space. Joe also had taken a balloon to 97,000 feet in Project ManHigh, and survived a drogue mishap during a jump from 76,400 feet in Excelsior I. Joe’s helium balloon was launched from the back of a truck. He wore a pressurized suit in an open, unpressurized gondola. The Scientific data captured from Joe Kittinger‘s jump was shared with U.S. research personnel for development of the space program.

LAUNCH ABORTED ~ Tuesday 9th October 2012
The launch of the Red Bull Stratos capsule was stopped at 11:42 a.m. local time in Roswell, New Mexico, just before Felix Baumgartner’s massive 30 million cubic foot balloon had been fully inflated, ready for take off. The Red Bull Stratos team postponed the launch due to strong winds at 700 feet, at the balloon’s top, while waiting for the right weather. See the 1st Attempt Aborted due to Gusty Winds – Red Bull Stratos video… 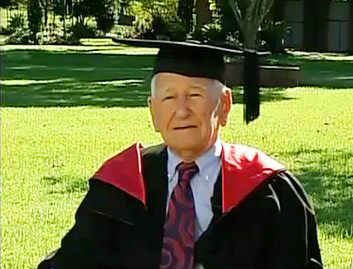 “People should never use the excuse that ‘I am too old to study’ or ‘I have left my run too late’,” ~ Allan Stewart

97 year old Allan Stewart from Australia became the World’s oldest university graduate for the second time, more than 70 years after attaining his first degree. He surpassed his own Guinness World Record when he graduated with his 4th degree, a Master of Clinical Science (Complementary Medicine) from Southern Cross University in Lismore, on Friday the 4th of May 2012. Allan achieved his first Guinness World Record title 6 years earlier, at the age of 91, when he completed a law degree at the University of New England.

“I can hang up my mortar board and academic robes after this one, although I said that after my last degree and then I got bored” ~ Allan Stewart

Allan Stewart is a Sydney-born great-grandfather, and retired dentist, now living at Port Stephens. He attained his first degree in 1936, when he graduated with a Bachelor of Dentistry with Honours from the University of Sydney. He later completed a Doctor of Dental Surgery degree at Northwestern University in Chicago, and practised as a dentist in London, Sydney and rural northern NSW.

“I have so much time on my hands these days and I like to keep mentally active.” ~ Allan Stewart

Allan said fitness and having a focus in life was a key to his longevity and intellectual stimulation.

“It is never too late to expand your mind, make new friends and challenge yourself to achieve something worthwhile.” ~ Allan Stewart

Allan Stewart still lives independently at the age of 97, and also acts as a carer for a friend. He thinks about each day and what he wants to achieve, and says that gives him focus and purpose. Allan said “There’s a lot of surprise but I think the fact that I’ve done what I’ve done has been an encouragement to a lot of people, particularly older people and say baby boomers to do the same”

Doctor Sonia Brownie, a Southern Cross University lecturer said she did a double take when she first saw an enrolment application with a date of birth of 1915. “When I initially saw his application for enrollment I trotted back down to the student liaison team because I saw the date of birth 1915 and I said for them to check that he indeed was a man well into his senior years,” she said. Mr Stewart studied mostly by correspondence online, and is known to be excellent at time management.

When Allan was not studying for his fourth degree, he was walking, gardening, fishing, playing golf, and assisting in the local community technology centre. Allan says it’s one of his paradigms to keep the mind and body active. “When you do graduate it’s not just sufficient to say well I’ve gone so far, I feel that you need to continue learning,” he said.

In the future, 97 year old Allan plans to take it very easy and relax with friends and family, including his 12 grandchildren and 6 great-grandchildren.